From the beginning of the EUHubs4Data, the ethical and legal aspects of the future establishment of the Federation are gaining more and more importance, given the impact on both the short- and long-term activities of the project.

During the celebration of the second Data Forum, the project partners and external stakeholders had the chance to discuss those aspects that affect, on the one hand, the daily activities of the project (catalogue of datasets, data sharing, joint services delivery, experiments proposed and performed by SMEs external to the consortium using federated assets), and the future legal framework where the Federation will play, that is being defined by the new pieces of regulation published by the European Union (Data Governance Act, Data Act, AI Act, …) on the other.

At the start, Federico Milani, Deputy Head of the Data Policy and Innovation Unit in DG CNECT (European Commission), was in charge of setting up the scene by introducing the Data Governance Act and Data Act as key legislation pieces to enable the European Data Strategy. More specifically, he focused on the Data Act as a way to grant fair access to and use of data in Europe and to facilitate the use of data in IoT environments by harmonising the interest of users and manufacturers and providing rules for business to government data sharing in the case of exceptional needs.

After the presentation from the European Commission, the keynotes continued with Charlotte Ducuing, PhD Fellow in law from KU Leuven, who presented an interesting aspect of the Data Economy, which is to see it as a “political project”, since data markets are not natural and law and policy makers are extremely involved, so different orientations for the Data Economy are possible. Then, Laure Le Bars, Research Project Director at SAP Research & Innovation, showed the view of the large industry, and how it is aligned with the need of setting-up environments where to innovate and experiment, and how this need was at the origin of the creation of the Smart Data Innovation Lab, one of the first BDVA i-Spaces.

The second session of the event covered how the project plans to adopt and implement this framework by considering the specificities of the Federation. More specifically, Emre bayamlıoğlu, from KU Leuven and legal expert in EUHubs4Data, focused on the role of data intermediary as defined in the Data Governance Act, and how this role could or should be an option not only for the Federation but also for the DIHs if they want to offer data sharing services in this data environment.

During this session, Carlos Matilla, CEO of FuVeX (one of the selected SMEs in the first round of experiments in EUHubs4Data), talked about the daily struggle of SMEs with national legislation. FuVeX, in fact, deals with requirements stemming from working with critical infrastructure (they are primarily monitoring electrical power lines). While compliance often eats up much of the work, being able to deal with regulation can also be seen as a guarantee to survive in a highly competitive market, which would be much harder in an unregulated market. Carlos Matilla, also highlighted the importance of Digital Innovation Hubs to support SMEs in the process. DIHs, in fact, could act as experimentation sandboxes in which to test compliance with regulation and offer targeted legal support services. 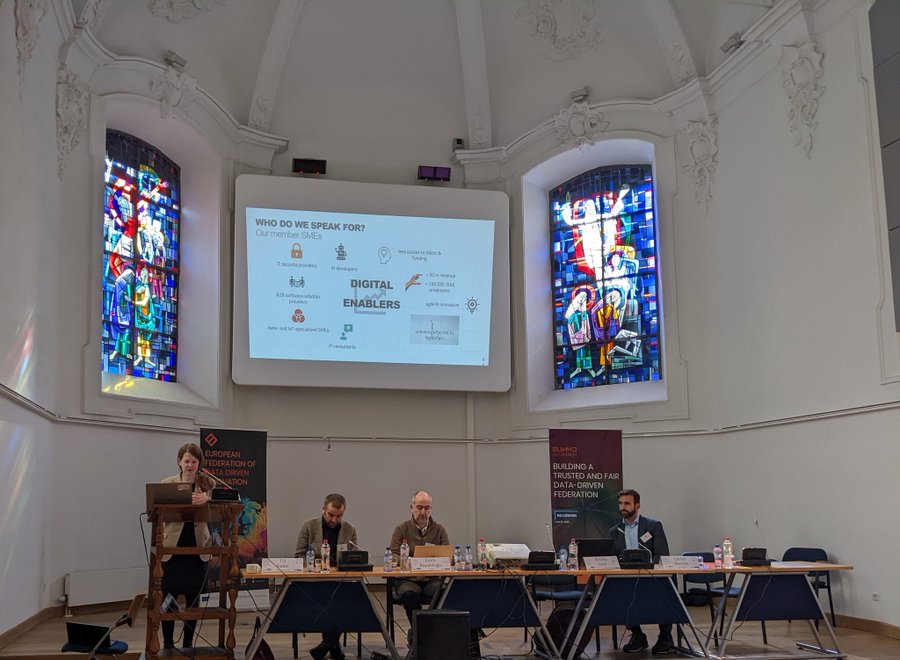 While data and AI regulations often appear as two different things, they typically meet in data-driven innovation, which the EUHubs4Data project wants to enable. Till Riedel, AI researcher at KIT representing the Ethics Monitoring Group of the EUHubs4Data project, asked the audience how many experiments, in their opinion, would likely fall under the regulation of the AI act. The audience was surprised to hear that two or three (considering the precedency compromise text) out of the ten experiments recently finalised as part of the project’s open call will likely address “high risk” applications regulated by the proposed act.

The Digital SME Alliance, represented by their EU policy director Annika Linck, presented the results of their analysis of the current and upcoming regulatory and ethical challenges.

A key takeaway of the event: “the upcoming regulations on data and AI will be a challenge to SMEs, but also a great chance for EUHubs4Data to provide assistance through a federation of DIHs”.

The final session of the Data Forum was about the future of the Federation of data driven innovation hubs from different perspectives. Julie Baloup from KU Leuven, also a member of the project, talked about different legal options to substantiate the Federation, and how the Big Data Value Association (BDVA) could be a valid option considering the statutes of an AISBL in Belgium.

From this, Daniel Saez, Strategic Intelligence & Technology Transfer Director at ITI and member of the Board of Directors (BoD) of BDVA, explained how the EUHubs4Data Federation is a very valuable asset for BDVA, with the origin in the BDVA i-Spaces group, and that there’s a dedicated working group within the BDVA BoD to study that option. Ana García, Secretary General of BDVA, also put an emphasis on this aspect and presented the Federation as part of a more comprehensive ecosystem involving the other hubs from the Data Spaces Business Alliance (including FIWARE, Gaia-X and IDSA).

Finally, and as final remarks, Daniel Alonso, Director of the Promotion and Positioning Area at ITI, chair of the BDVA i-Spaces group and coordinator of the project EUHubs4Data, considered the European Data regulation not only affecting the way the Federation will run and operate, but also as an opportunity to build a trusted and fair data driven ecosystem. Besides, DIHs and the Federation could provide an experimentation field for regulations and support SMEs on the way. Overall, he considered that the project is now at the perfect time to adopt and contribute to the European Data Strategy.

If you missed the Data Forum 2022, you can watch this video and check the presentations here!

Subscribe to the newsletter
Join us to be up to date with all the news from EUHUBS4DATA.
Manage Cookie Consent
We use cookies to optimize our website and our service.
Manage options Manage services Manage vendors Read more about these purposes
View preferences
{title} {title} {title}